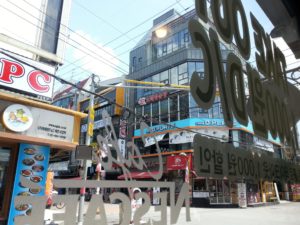 Flashbacks of basking in the weekend streets of Gung-dong. One of the many dense nightlife areas. All them being countless cafes, bbq’s, chicken places, karaoke and video rooms, arcades and cosmetics shops thrown together in the midst of old residential areas.

Outworldly new residential areas. But never too far away from the above-mentioned.

My visions of spring under way in the campus of KAIST polytechnic.

Outside Yuseong bus station, connected by memories to several other towns.

Every place can be reached from Daejeon in a few hours; combine this with the ubiquitous motels, baths and convenience stores (and credit card usage) and you had me toying with the idea of just stepping out of house and returning after a dozen towns. 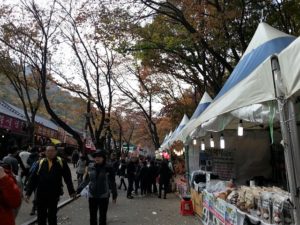 Not that Daejeon lacked places. Gyeryongsan mountain (and the national pastimes of hiking and undecipherable cornucopias of dry snacks).

Or, the temple with the curvy statues which name I was never able to find again. 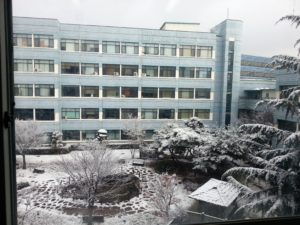 Winters can be cold (and every campus has dull sides) but what do we do when the weather gets bad? 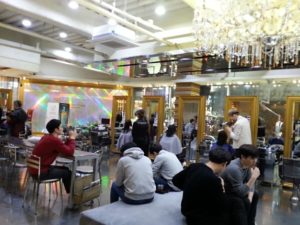 We get out of course! …Although this peek is only a hair salon in Dunsan-dong. Oh, I omitted hair salons before. Include hair salons in the nightlife areas.

And a glimpse of Yuseong spa district’s pulse by night. Attractive and mysterious in its neon cladding, and made to look more and more distant by my nostalgia now.